A Red Hood costume is perfect for individuals that are fans of the vigilante Batman Arkham Knight character that fights for justice. He is known as Jason Todd, Batman’s sidekick. He has helped the dark knight defeat the scarecrow, one of the villains in the Batman stories in the DC universe. Red Hood is an orphan turned vigilante under the mentorship of Batman. Red Hood has been depicted to continue the fight against anti-corruption, gang violence, and illegal activities in Gotham in an equally violent and anti-hero way. As such, he sometimes gets into blows and arguments with Batman’s companions, such as Robin, Nightwing, and even Green Arrow. 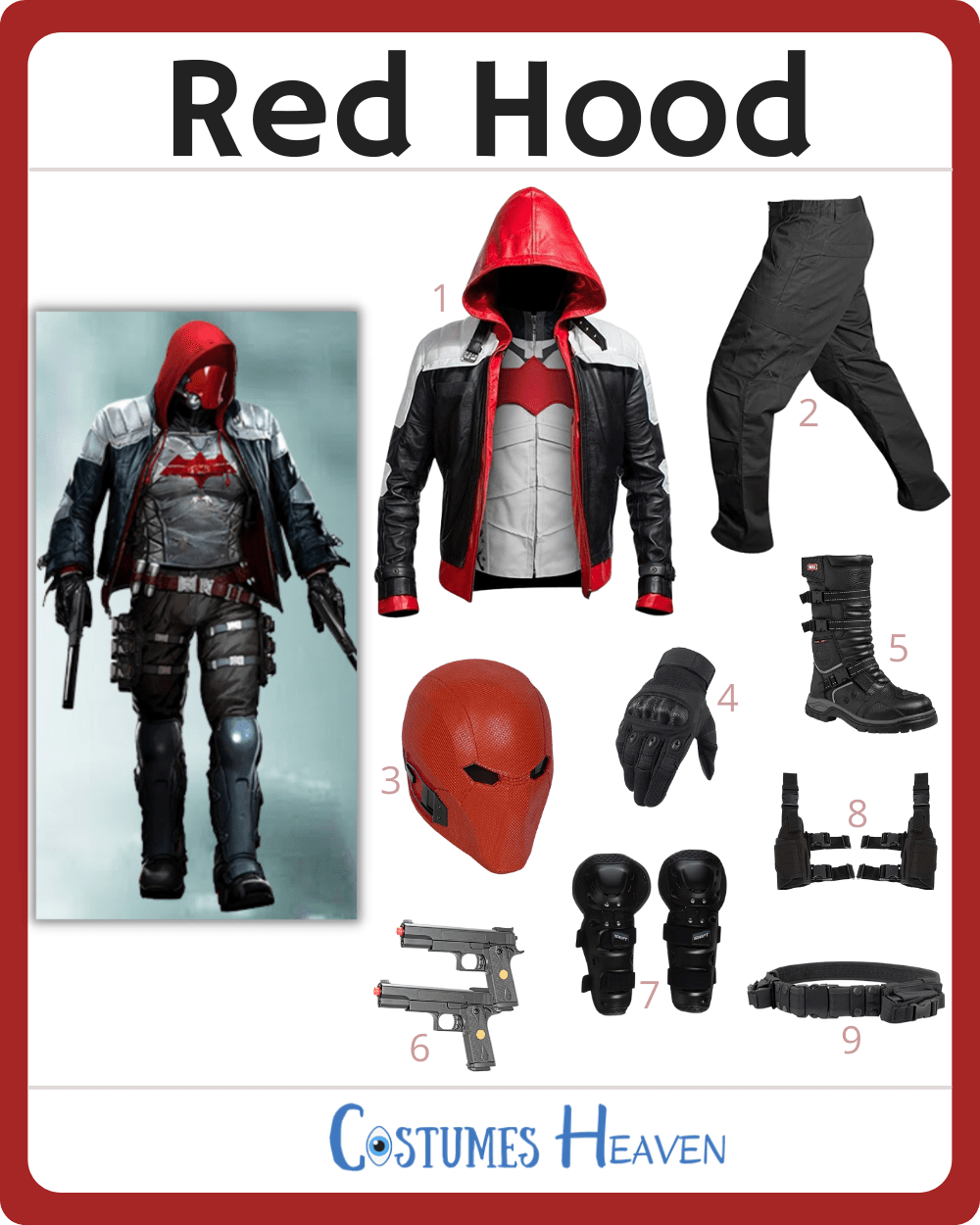 On a quest for redemption for his past crimes, the Red hood costume is easily identified and appreciated by fellow fans of heroes and anti-heroes.

To be able to give justice to his looks the same way he gives justice to the streets of Gotham, there must be an available Red Hood Mask, Jacket and Vest, Tactical Gloves, Belt and Pants, Shin Guards, Leg Holsters for both the right and left, Black Boots and a Pistol Prop.

Get ready to fight villains and protect the innocent with a Red Hood costume. This outfit is very much identifiable and the same as the character. Start with a Red Hood jacket and vest paired with tactical pants, belts, and Gloves. Armor up with shin guards and holsters to hold a pistol prop in both the left and right leg. Put on the Red Hood mask to maintain a signature appearance and look.

With Red Hood’s masked identity and reputation, he has earned his place as the second Robin. His appearance as one of the main characters in charge of crime-fighting together with the Batman team. It will make this costume adored by many spectators and recognized.

Make sure to bring in the attitude and vigilante mindset to accompany better the Red Hood costume and be the unique one among the rest.

About  Red Hood From Arkham Knight

Red Hood, also known as Jason, was caught by Batman for thievery as he wanted to steal the tires of the batmobile and other petty crimes. Batman took him under his wing instead of putting him in jail as he felt pity for him. Red Hood has turned to be arrogant, mean-spirited, and ruthless. Despite this, he saved Batman from the villain DeaconBlackfire.

An unfortunate event that led Red Hood to be killed by Joker. After he was resurrected and found that Batman had not avenged him, he grew in hatred from this pain. He has sworn to clean up the city of Gotham and kill the Joker himself in ways that Batman cannot do or avoid as it is against his principles.

Red Hood has brought another brand of justice through a more lethal, ruthless, and brutal manner that the people deem to be villainous. Still, in reality, it is just his way of dealing with the injustices in his city and experiences and not because he wants to hurt innocent people in Gotham.

What is the most famous quote from Red Hood?

1. “Just be happy I only killed one of them. They’re all assassins.”

3. “I’m going to blow his deranged brains out! And if you want to stop it, you are going to have to shoot me, right in my face!”

4. “It’s too late. You had your chance. And I’m just getting started.”

5. “You can’t stop crime. That’s what you never understood. I’m controlling it. You wanna rule them by fear, but what do you do with the ones who aren’t afraid? I’m doing what you won’t, I’m taking them out.”