Winifred Sanderson: Leader of the Witches

Winifred Sanderson is one of the main antagonists in the movie Hocus Pocus. Much like her other two sisters, she is a witch. Winifred Sanderson and her sisters sold their souls for the ability to do magic with access to a powerful book of shadows. She serves as the leader of the other two as they go around attempting to steal the souls of children. They believe that this will help them achieve eternal youth and immortality. 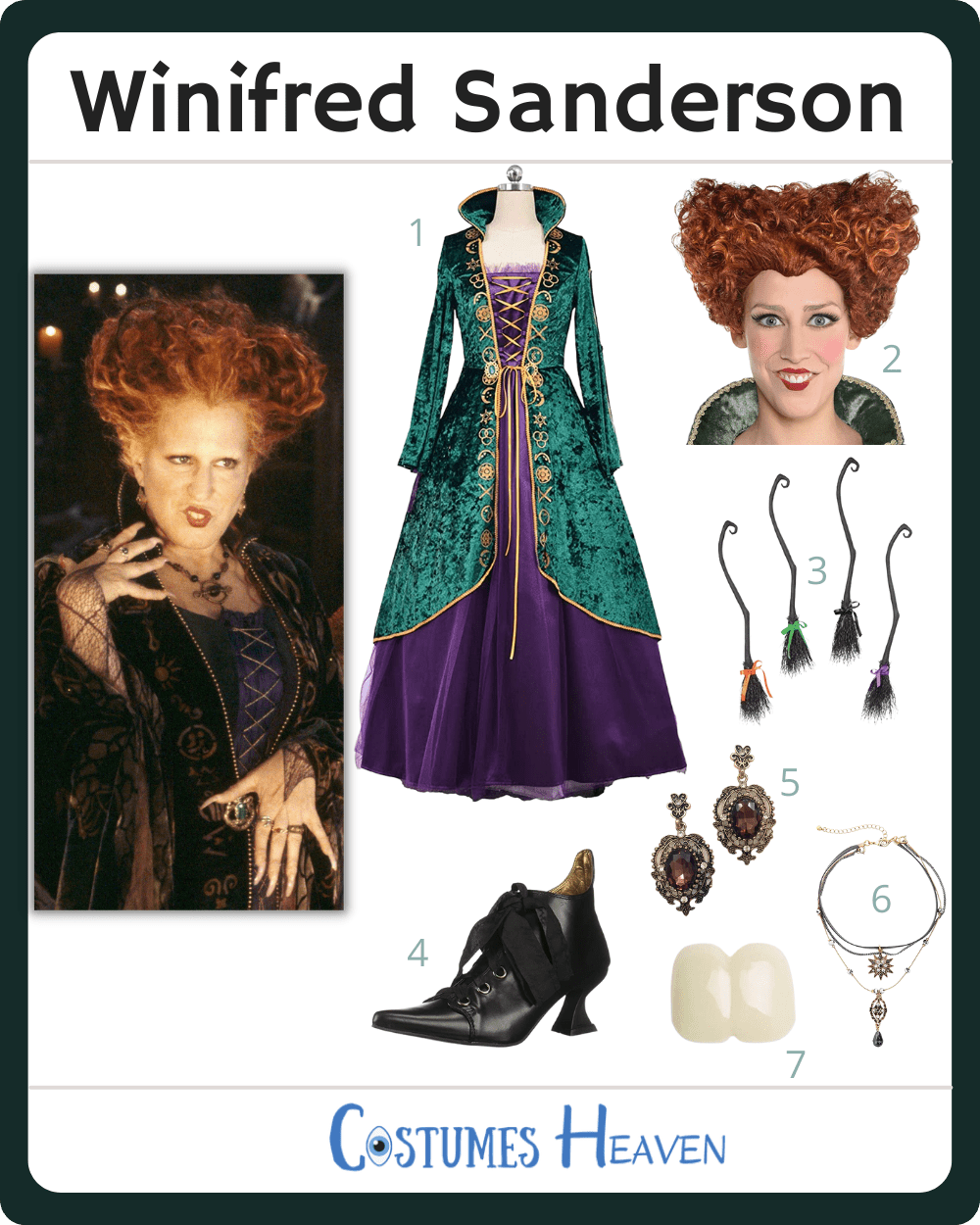 The Winifred Sanderson costume is sure to make anyone who sees you feel nostalgic for the 90s. The Winifred Sanderson costume can be done by assembling and layering the right apparel and accessories. Below, we have put together a list of what you will need to create your own look. Follow the steps to get the costume ready for your next Halloween party.

Fans of Hocus Pocus tend to have a favorite among the three sisters. If you are partial to Winifred Sanderson, you can easily dress up like her. Below, we have listed the items you will need to create your very own Winifred Sanderson costume.

To start, you will need a lavish green long sleeve dress in a medieval style. She wears witchy shoes with pointy toes that easily stick out from beneath her dress and cloak. Winifred accessorizes with a black choker necklace. You can buy one premade or go for greater accuracy by shopping for a handmade one to match hers. You could also create it yourself. She wears gold earrings and several finger rings. At the ends of her fingers are long nails that almost look like claws.

Among her most defining features are her large front teeth and red bouffant style hairdo. By including both in your costume, you will be instantly recognizable. If you want to bring the outfit to life, you should carry a prop broom like the one she rides with her sisters.

About Winifred Sanderson from Hocus Pocus

Winifred Sanderson is one of the three witch sisters in the movie Hocus Pocus. She is the leader of the three and is often the one cooking up their plans. The antagonists in the film, the sisters are constantly looking for children to steal their souls. They do so with the belief that they can achieve immortality.

The sisters tend to strike on Halloween when their appearance does not draw too much attention. In Hocus Pocus, the sisters target a group of kids. As the story progresses, you see Winifred Sanderson taking increasingly more dramatic measures to try and thwart the children’s plans and get what they are after.

What is the most famous quote from Winifred Sanderson?