Walter White is one of the main characters in the AMC television series Breaking Bad. With a meek and friendly personality, he is an overqualified high school teacher.

Upon being diagnosed with cancer, Walter inadvertently turns into the world of drugs. His brilliant scientific mind understands precisely how to make the drugs. Walter gets the idea to make and sell his own meth. 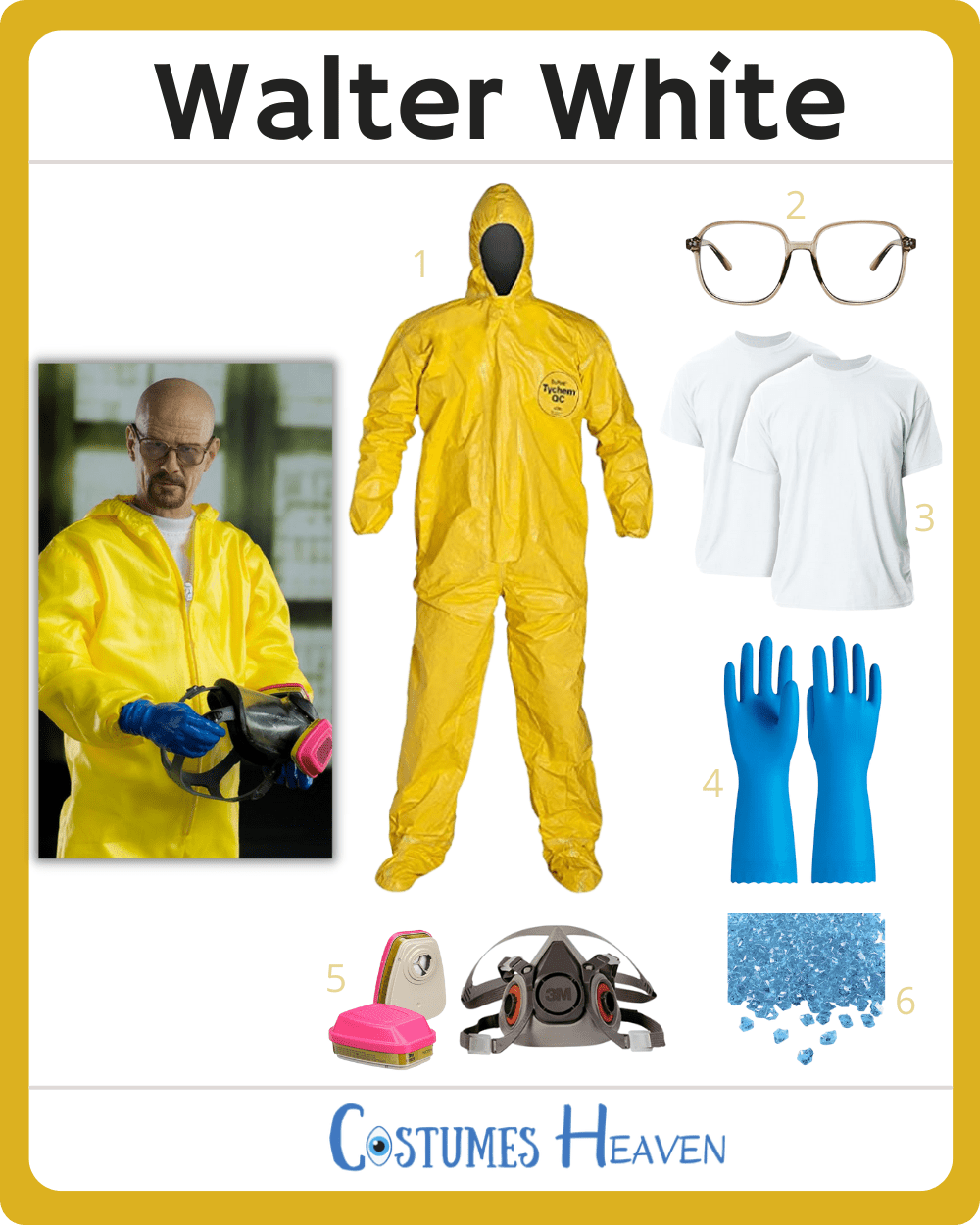 Over time, Walter slowly climbs the ranks in the drug world, and his cancer goes into remission. From there, he went from being a chemistry teacher to a meth maker.

Commonly, viewers see Walter White wearing his yellow chemical coveralls and respirator in his lab. The Walter White costume is an easy and iconic one to recreate.

You will need a White T-Shirt underneath Dupont Yellow Chemical Coveralls. Then, put on Respiratory Protection, Square Glasses, and Working Hands Gloves.

Walter wears many different outfits during the show. The yellow chemical suit he wore while making meth was particularly impressive.

Walter wears a respirator over his face, so you will also need one. You can wear the respirator as meant to be worn or on top of your head, as he is often seen doing in between cooking steps.

Under the yellow suit, he wears a simple white t-shirt, and he does his job wearing long gloves. Finally, you will need a pair of clear rectangular frames.

Try out the  Walter White costume to dress like a drug kingpin and bash at the Halloween party. This Breaking Bad outfit is sure to be an awesome one.

About Walter White from Breaking Bad

Upon being diagnosed with cancer, Walter White starts to panic, wondering what his family will do financially when he is gone. He takes it upon himself to find a way to bring in more income.

The straight-laced teacher is indirectly introduced to the world of drugs by his brother-in-law, Hank. Hank is a DEA agent who invites Walter White to ride along for a drug bust.

While there, Walter White sees the potential that such things have to bring in a lot of money. He decides to use his chemistry skills to cook methamphetamine beside his former student, Jesse Pinkman.

The two end up climbing their way to the top of the drug empire together, with Walter White eventually going by the moniker “Heisenberg.”

What is the most famous quote from Walter White?

3. “If you don’t know who I am, then maybe your best course would be to tread lightly.”

5. “It’s always been one step forward and two steps back”