The Weeknd costume is a great choice for lovers of music. A prominent pop artist, The Weeknd is known for his music and his bold style on and off stage.

Born Abel Makkonen Tesfaye, The Weeknd is a Canadian singer, record producer, and songwriter. He got his start by uploading a few songs to YouTube anonymously under what would become his stage name, The Weeknd.

The following year, he released three different mixtapes. These include House of Balloons, Echoes of Silence, and Thursday. 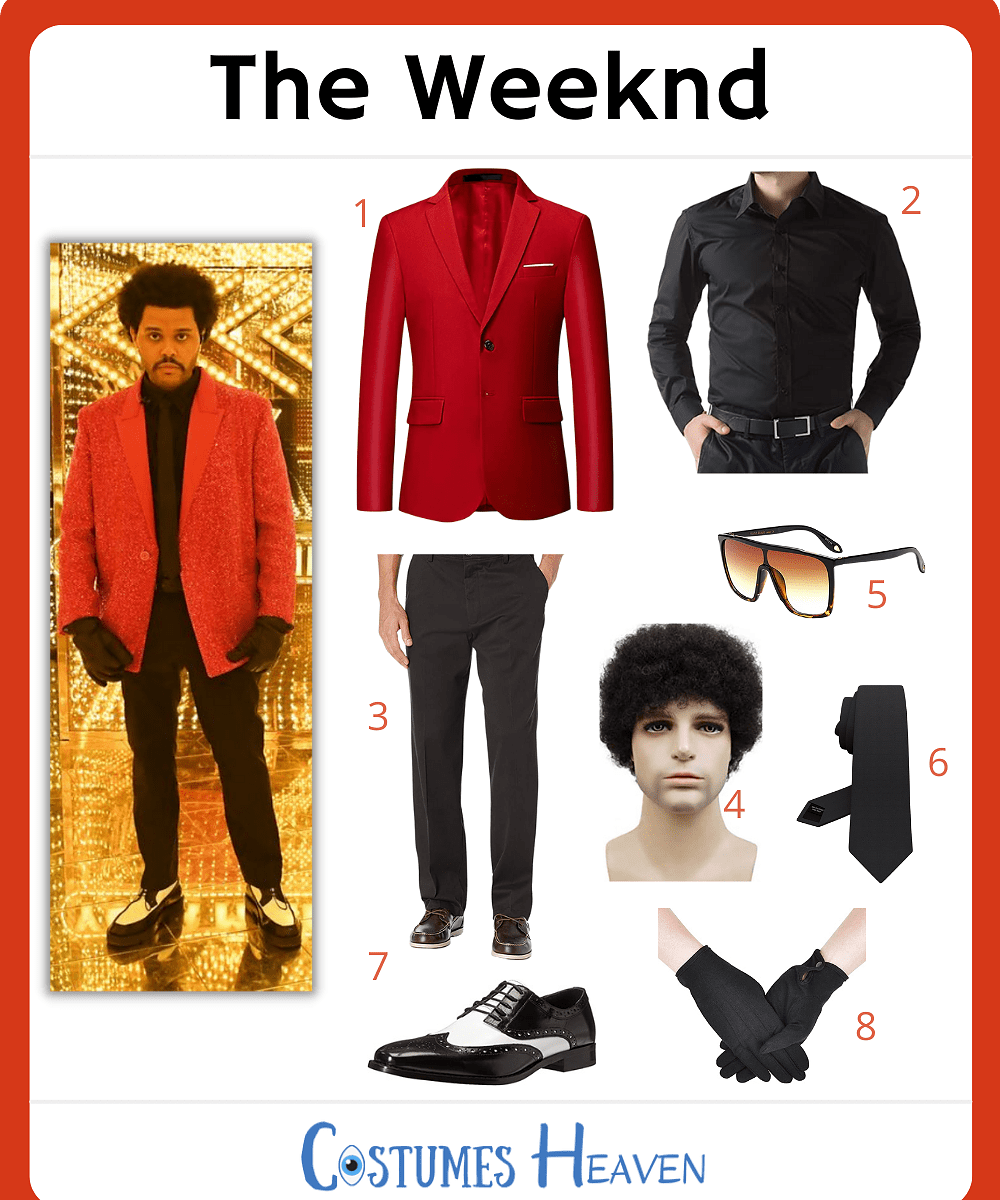 During the 2020 VMAs, The Weeknd showed up wearing a dramatic ensemble.

He was wearing a bright red suit jacket with bruises and cuts on his face. This has become one of his most famous looks.

Alongside the suit coat, he also wears a pair of black pants and, beneath the coat, a black button-up shirt.

On his hands, he wears a pair of black leather gloves. On his feet, he dons a pair of white and black two-tone Oxfords to finish off the look.

To get the look right, you will need a black tie, retro sunglasses, mustache accessory. You will also need to wear a short black afro-style wig.

Though he has since worn many different styles of clothing, this outfit remains among the most iconic.

His bright red suit coat is what he is most often associated with. Music lovers that you know are sure to be able to recognize this costume instantly.

It makes a great choice for any Halloween or other costume party you plan to attend, especially among fans of The Weeknd.

Because the outfit is a simple one, it is easy to piece together. You may already have some of the necessary pieces for the ensemble in your closets, such as the black button-down and the black leather gloves.

One way to make this costume stand out is to use makeup to create the bloodied and bruised state that his face was in during the 2020 VMAs.

The Weeknd is a pop artist from Canada. He first came onto the scene in the early 2010s. During this time, he anonymously uploaded songs to his YouTube channel.

His name is Abel Makkonen Tesfaye, but he is more commonly known by his stage name, The Weeknd.

He chose his stage name in reference to his best friend at the time, stating they “left one weekend” and never returned.

He kept the letter “n” out of the word “weekend” in order to sidestep any copyright claims on the name, as another artist currently has that name.

After an appearance at the 2020 VMAs, his red and black outfit became his most recognizable.

What is the most famous quote from The Weeknd?

3. “I chose the life, then I realized she might have been the one, I let her go for a little fun.”