Spice up your Halloween with a mix of love and laughs with a Nacho Libre costume. Modern-day Robinhood who is a cook during the day and a wrestler at night, Nacho Libre was portrayed by Jack Black in its movie adaptation. In the movie, he is highlighted as a caring, genuine person who cares for the orphans and would do what it takes to provide for them. What led him towards the wrestling ring? Love. And the desire to be a luchador. 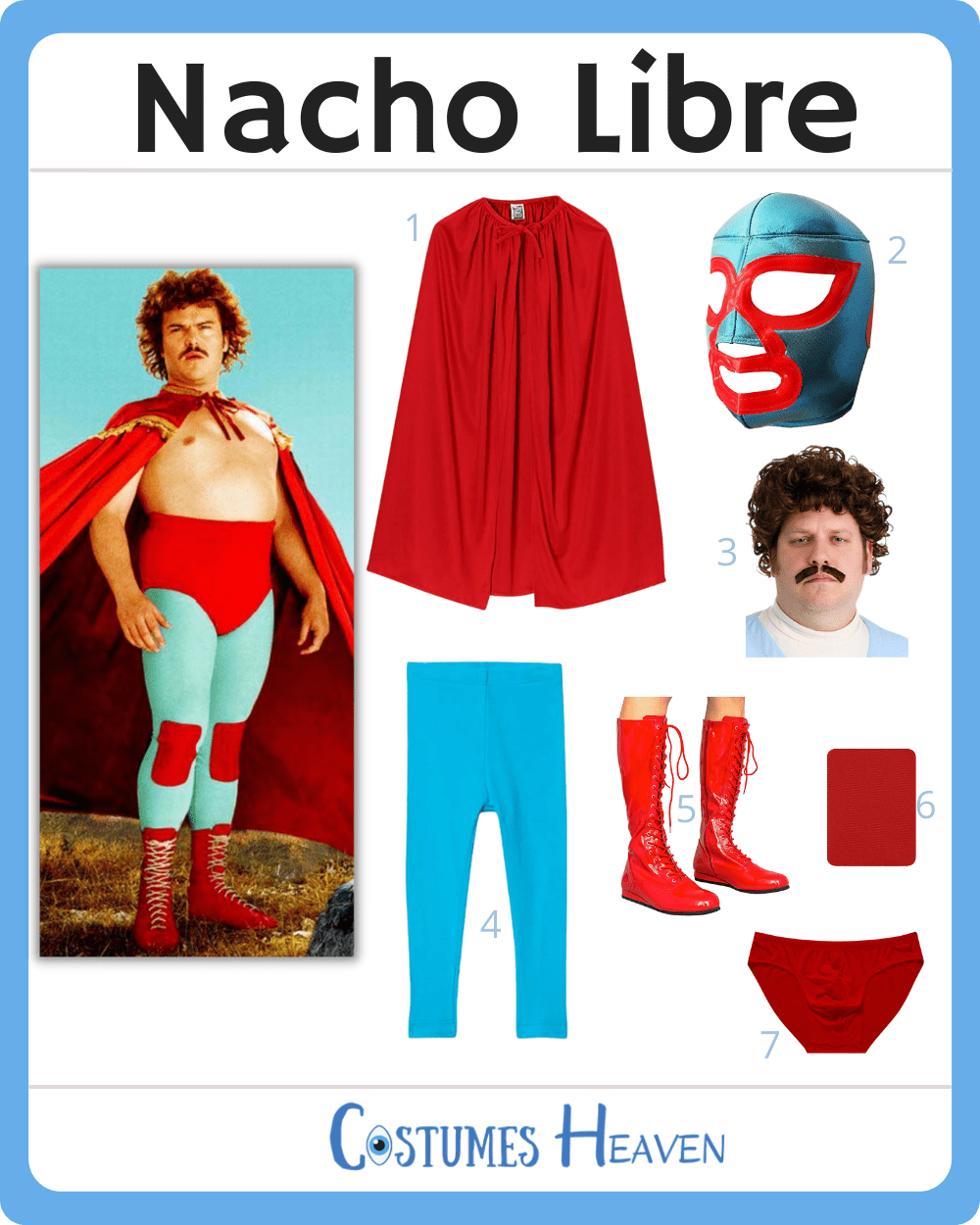 Nacho Libre is a highly infectious entertaining time that will keep you constantly laughing throughout. The movie seems to float in the unconscious minds of a ton of people, and this Nacho Libre costume is no exception.

Recreate the most iconic look, you will need a Red Cape, Nacho Libre Wig & Mustache, Light Blue Leggings with Fabric Embroidery Patches, Wrestling Costume Boots, and Red Underwear. Most importantly, put on Nacho Libre Mask to complete your look. At a glance, Nacho Libre’s costume looks like all the random things you can find in your closet. All the costume pieces will make it easy for you to become a wrestler.

If you’re going for a carefree, movable Halloween costume, then the Nacho Libre costume is one of the best choices yet. Aside from tons of laughter, it’s also guaranteed that you’ll get lots of love! Everybody loves a great background, and Nacho Libre’s character offers exactly that. Who knows, you might be the next trendsetter!

From the wig that’s similar to the ’80s, to the red, long cape, it’s something that you can assemble in a jiffy. Of course, cosplay costumes won’t be the same if you don’t use the exact colors or structure of the pieces. For your Nacho Libre costume, here are the things that you need. Secure an auburn wig that looks like a mullet. This is one of Nacho Libre’s signature features, so don’t miss it for the world.

Next, grab a pair of high-waisted underwear. You’ll have to wear that on top of a sky-blue pair of leggings. An important detail you have to put on your leggings are red rectangle kneepads on each knee.

To top all of that off, get your chunky red boots going and you’re ready to be a mighty Luchador!

The movie story follows a monastery cook Ignacio who spends his day feeding orphans. He is somebody who really follows the gospel and loves the kids. But he aspires to more outside of the church and outside of his normal cooking duties. And he wants to become a luchador. When Sister Encarnación arrives at the convent, Ignacio realizes that the only way to win her affection and save the children is to enter the tournament as a wrestler.

But wrestling is forbidden in his convent, so he pretends to be Nacho Libre and enters the wrestling tournament as a secret. He eventually wins the tournament and uses the money he wins to support the orphanage. At the same time, he wins the favor of Sister Encarnacion.

What is the most famous quote from Nacho Libre?

3. “Beneath the clothes, we find a man… and beneath the man we find his… nucleus.”