Step up on your 1980s-themed costume party with this Madonna costume from her all-time favorite hit, Like a Virgin!

Madonna is an American pop icon and actress who made her name in the 1980s entertainment industry. Her song Like a Virgin made it to Billboard’s top 100 for six weeks.

People know her as the “Queen of Pop.” Her versatility in the music industry made her way to the top. Aside from singing, Madonna is also a songwriter, record producer, and composer.

Aside from the numerous awards that she has received during her entire career, several organizations also listed her as the most successful female recording artist. And her Confessions Tour was recognized as the highest-grossing concert by a female singer. 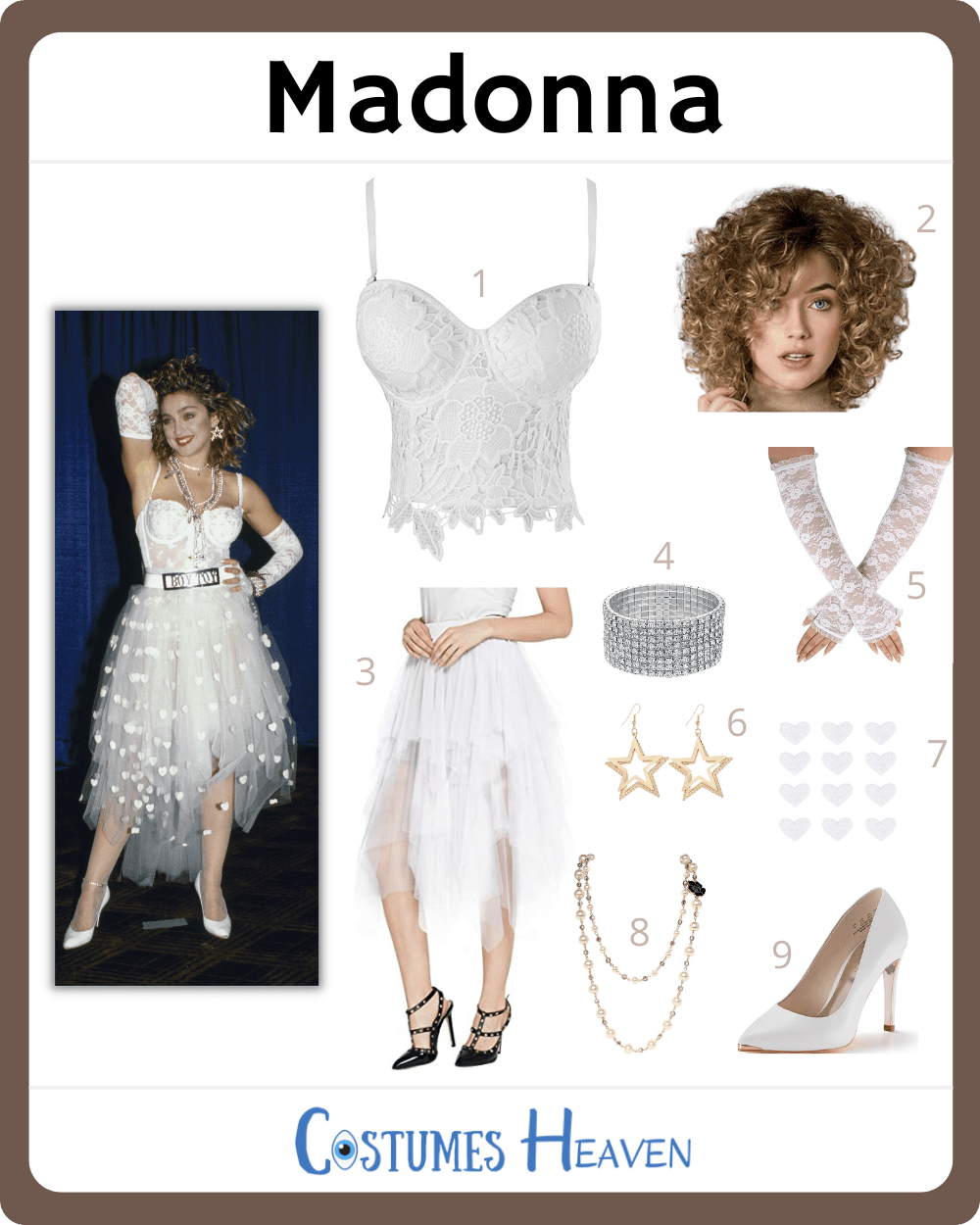 Madonna’s hits may have raised eyebrows and criticisms because of her seductive and satirical outfits.

Her song Like a Virgin was controversial, yet still loved by people. And what she wore in the song’s music video is still one of the top favorites at themed parties.

Her outfits always make a lasting impression. During her awards show performance in the 1980s, she wore a sheer white dress as she sang her hit song Like a Virgin.

She went out off the top of a wedding cake and shocked the world. Her fearless-looking outfit influenced everyone to embrace their sexiness.

Her fans loved the Like a Virgin Madonna costume. She wore a white sheer bustier top partnered with a white layered tulle skirt. Her lace gloves, white heels, and gold star earrings made it even sexier.

Don’t forget her iconic 1980s teased hairstyle and the boy toy belt. Because this is a vintage look, getting Madonna costume pieces are easily found in shops.

Her original name is Madonna Louise Ciccone, and she was born to Italian and American parents. She studied dance at a university and dance theater.

Her performance was seen on rock bands before she signed up with a contract which made the start of her popularity.

Most of her songs are upbeat and talk about sex and relationships.

Her accomplishments in singing and performing made her sell millions of albums and top the major music charts. Aside from performing, she also appeared in several movies.

Her attitude and lifestyle made a socio-cultural impact on the public. She was criticized by feminists, religious groups, and family organizations because of her controversial songs and performances.

But for some, she is a unique female icon who can create an identity for herself.

People still love the Queen of Pop until this day. Though she might have aged, her popularity did not fade on the music scene and continues to top the music charts.

What is the most famous quote from Madonna?

2. “No matter who you are, no matter what you did, no matter where you’ve come from, you can always change, and become a better version of yourself.”

3. “Sick and perverted always appeals to me.”

5. “Sometimes you have to be a bitch to get things done.”