Suppose you are looking for a cosplay inspiration but do not want the usual Harry Potter route. In that case, wearing a Hagrid costume might be the next best thing for you. Hagrid is a character loved by many, so cosplaying as Hagrid is sure to be a hit with Potterheads. He is a character in the Harry Potter series. Hagrid is the loyal gamekeeper of Hogwarts and the one who brought Harry to the school where it all began. 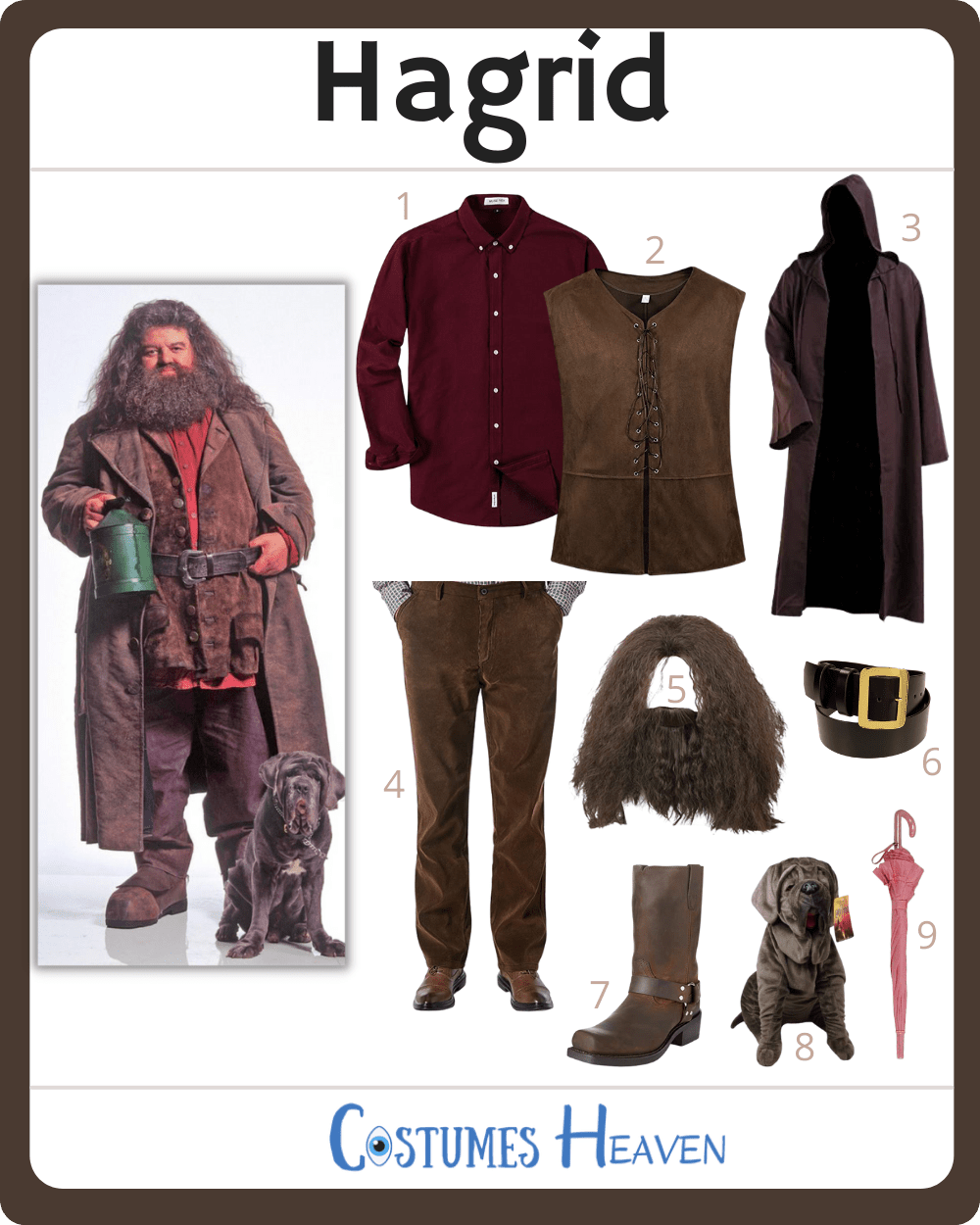 Hagrid is a giant with a kind heart, making him an important character in the Harry Potter series. If you don’t want to be mainstream in your cosplay choices, wearing a Hagrid costume might be the right one for you.

Start off with Red Long Sleeve Shirt and Brown Vest underneath Brown Hooded Robe. For the bottom, put on Brown Corduroy Pant with Harness Boot. The key to nailing the Hagrid look is in the props and accessories. The Hagrid Wig, Beard, and Leather Belt will help you achieve his iconic look. You can bring Hagrid Fang Dog Plush with you. Don’t forget to take your Pink Umbrella to cast magic.

Hagrid may not be the main character in the Harry Potter series. Hagrid is a character loved by many, so cosplaying as Hagrid is sure to be a hit with your friends and at conventions. Hagrid always stands up for what is right and shows immense loyalty to those he cares about, which are qualities that many people aspire to have.

Whether you are looking for an easy cosplay option or want to show your love for an underrated character, Hagrid costume is a perfect choice.

If you want to keep up with the Harry Potter theme for your next costume event, have your friends dress up as Harry, Ron, Hermione, Professor Albus Dumbledore, and Lord Voldemort for an iconic group cosplay.

About Hagrid From Harry Potter Series

Hagrid might be well-known for his gigantic physique and brute force, but he has a soft spot for all creatures, great and small. He is fiercely loyal to those he cares about and always stands up for what is right – making Hagrid one of the most loveable characters in the Harry Potter series. He is also notable for raising giant spiders and even taking care of his giant half-brother, Grawp.

Many people know Hagrid as a staunch supporter of Dumbledore, whom he treats as a father figure. Hagrid is also known for his immense loyalty to Harry Potter and always being there for him – even when nobody else would.

What is the most famous quote from Hagrid?

1. “There’s A Storm Coming Harry, We’d All Best Be Ready When She Does.”