The Matt Murdock Daredevil costume is one of the most popular and easily recognizable in the Marvel fandom. Daredevil, whose real name is Matt Murdock, was blinded as a child in an accident. This accident would give him superhuman powers, including impeccable hearing. Matt Murdock uses his abilities and his martial arts training as a child to fight crime in Hell’s Kitchen by night. This earns him the nickname of The Devil of Hell’s Kitchen. During the day, Matt Murdock is an attorney at law who shares an office with his long-time best friend, Foggy Nelson. Foggy doesn’t know about Daredevil’s real identity, and Matt goes to great lengths to keep it that way. 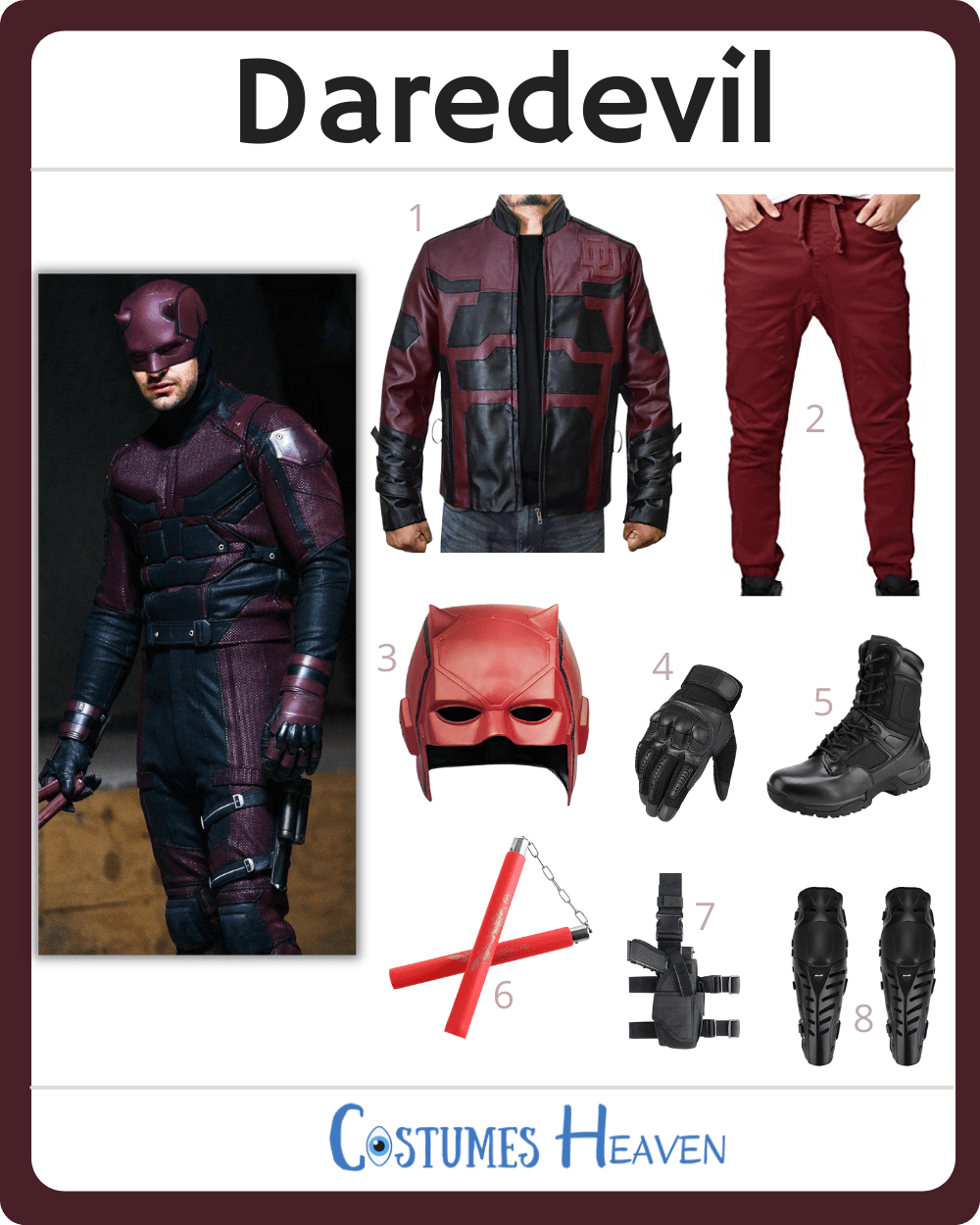 Daredevil struggles with the way his night job requires him to push those moral beliefs to the limit and make him relatable. From Matt’s heart of gold to his conviction and desire to do good, he inspires many. For this reason, many fans of the comic books and show like to dress in a Daredevil costume. Simply follow our costume guide below if you’re ready to piece together your own Daredevil costume.

Although Daredevil also appears in all-black suit, this dark red suit with the Daredevil mask is his iconic costume.

The Daredevil costume is a bit detailed, and you may find it difficult to locate all of the pieces that you will need. Some of the most difficult parts of this costume include the helmet and finding the exact leather jacket. The rest of the items should be easy enough to come by. You can either purchase the full Daredevil costume online or go the leather jacket and red pants route.

You can look for the right mask or helmet after locating a Daredevil-inspired red and black leather jacket. You will want to wear a skintight black long-sleeved shirt underneath the jacket. For the pants, you could opt for a pair of skinny red jeans or other form-fitting red bottoms. He completes his look with boots that rise to the calf. These boots also have buckles and straps, so be sure those you choose to have them. Finally, you will need a wood dowel rod or pair of nunchucks, as these are what Daredevil fights with.

Matt Murdock is an attorney by day and a vigilante at night. Even though he takes crime-fighting into his own hands, he is driven by a moral compass that refuses to let him take a life. This is true even in the case of Wilson Fisk, more commonly known in Hell’s Kitchen as the Kingpin. The Kingpin is Daredevil’s main villain, and Matt spends much of his time trying to bring the man down. The Punisher is another villain who notices Matt because of his strict moral code and attempts to exploit it.

What is the most famous quote from Daredevil?

2. “I’m not seeking penance for what I’ve done, Father. I’m asking for forgiveness… For what I’m about to do.”

4. “Doc, I’“There’s one thing in this world that makes me feel more alive. And that’s you.”