The Al Bundy Costume is a fun choice for lovers of classic television.

Al Bundy is a character in the show, Married… with Children. He is the husband of Peggy and the father of Bud and Kelly Bundy.

Al Bundy also works as a salesman for women’s shoes. While working for the shoe store, he also founds an organization known as No Ma’am, which is an anti-feminist entity.

Peggy and Al had a shotgun wedding that led to a lot of apathy and indifference in their marriage.

Al catches a lot of flack for his job, something that Peggy and their kids both tease him about. His job is blamed on the “Bundy Curse,” which may explain a lot of his misfortune. 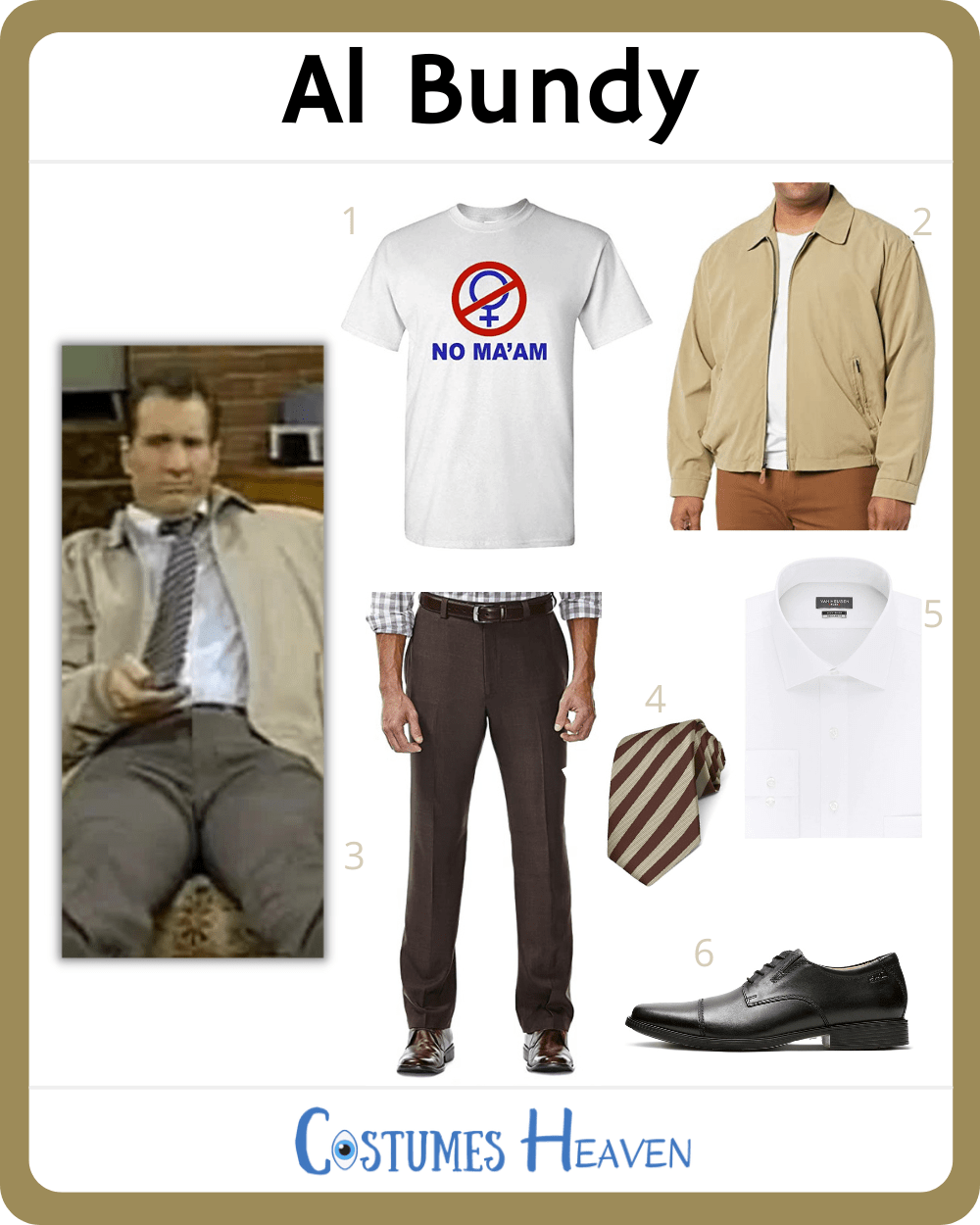 Al Bundy is a comical character that stars in every episode and sets the tone for the show.

If you are a fan of this classic TV show, you’ll love dressing up in your own Al Bundy costume. Below, we will tell you how.

To dress like AI Bundy, you will need Golf Jacket paired with White Dress T-shirt and Brown Dress Pants.

Then,  add Stripped Tie and Oxford Shoes to the costume. Most importantly, don’t forget the iconic No Ma’am T-shirt to finish the touches on your Al Bundy costume.

If you are a fan of classic TV, there are few characters more iconic for cosplay than Al Bundy.

Al Bundy wears pretty plain clothing. This makes his costume an easy one to assemble and may mean that you already have some of the attire in your closet.

To begin, you will need to get together his staple pieces. Al is commonly seen wearing a brown jacket over a button-up shirt and a necktie.

Just as often, he is wearing a shirt that says, “No Ma’am,” referencing his anti-feminist organization. Then, you can pair it with a pair of gray trousers. If you want to bring more humor and specificity to the outfit, you can also wear a “No Ma’am” trucker hat.

Get much fun for your cosplay; you can invite your partner to dress like Peggy. In this way, you can have a great couple costume for Halloween or your next cosplay event.

Al Bundy is one of the main characters in the show Married… with Children. He is the head of the Bundy household, made up of his wife, Peggy, and his two children, Kelly and Bud.

Al works at a shoe store as a salesman for women’s shoes, something that his family often makes fun of him for.

On the side, he is the founder of an anti-feminist organization known as “No Ma’am.” The misfortune that Al Bundy experiences is often blamed on the “Bundy Curse,” something that runs in his family.

What is the most famous quote from Al Bundy?

1. “Come on, Jefferson, it’s just us, some beer, and some Mexican strippers. What could happen?”

3. “The opera isn’t over until the last heterosexual falls asleep.”